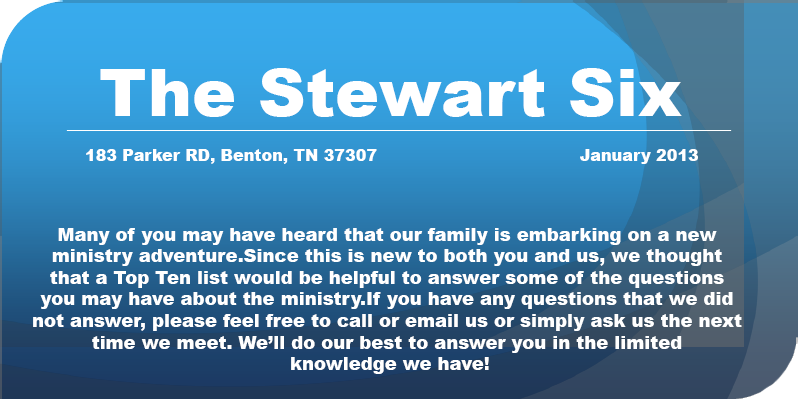 10. What exactly are you doing?
Our family is involved in the beginnings of a Bible Study in Cleveland and developing a congregation in Chattanooga. Both of these groups are Messianic Jewish and focus on the Jewish roots of Christianity. We will be helping build up these two groups and reaching both Jews and Gentiles for the Messiah.

8. Are you going to change, you know, get weird?No…and yes.  No, we are still the Stewart Six (weird as that may be!)  After all, my living room is a storage building for movie supplies! :) But seriously, yes, because anytime you seek after the Lord and draw near to Him, you are changed.  We all should be changing daily to become more like Him.

7. Are you becoming an Orthodox Jew?
No. We are Gentiles, justas most of those readingthis letter. We do believethough that as a Gentilebeliever in the Messiah wehave been grafted into thevine of which the Jews arethe original branches.

But if some of the branches were broken off, and you, being a wild olive, were grafted in among them and became partaker with them of the rich root of the olive tree, do not be arrogant toward the branches; but if you are arrogant, remember that it is not you who supports the root, but the root supports you. Romans 11:17, 18 NASB